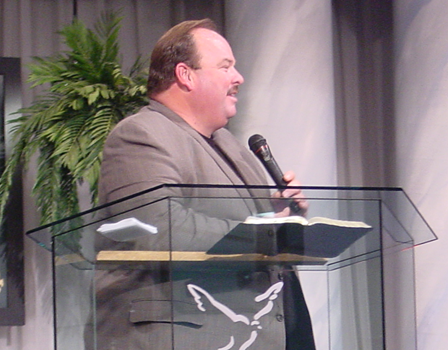 Pastor Stephen pioneered Life Christian Church in 1985 with a handful of people, teaching and preaching the Word of God and changing lives. Over 20 years later, his vision remains the same; teaching God’s truth and changing people’s lives.A “tell-it-how-it-is” preacher of righteousness, Pastor Stephen has an internationally acclaimed ministry. With a heart to build Christ’s church, he is committed to training leaders and ministers with a passion to take Christ’s message into all the earth.

From the day of his conversion to this very day the heart beat of Dr. Stephen R. Johnson has been the great commission of the Lord Jesus Christ. Salvation of the lost followed by discipleship and training others for the ministry have been the fundamentals of his life and ministry as a man of God. Dr. Johnson believes in leadership and has faithfully submitted to his Pastor  Dr. Mark T. Barclay of Living Word International in Midland Michigan for over 23 years.

When Dr. Johnson formed his prophetic ministry, there was nothing International about the ministry but a vision and heart for the world that was inspired by the call of God to reach the lost. Now, 23 years later the fruit of this call is not only affecting the United States but the Nations. Nationally, Dr. Johnson has planted four churches and internationally has started five satellite bible colleges.

From the early beginnings of starting the church, Dr. Johnson had a heart for world missions. For over 20 years an offering has been received at the end of each Sunday morning service specifically for world missions. In addition to financially supporting selected missionaries the church has sponsored numerous events to bring missionaries to the USA for times of refreshing. Years of steady support has given to these missionary families and organizations.

Word Bible College is a fully-accredited Institution that was established in 1991. In addition to the local operation of the college in Escondido for the past 17 years, satellite Bible colleges have been established in the United States and through the world. The combined college locations have graduated thousands of students, many with a variety of under graduate and graduate degrees. Nationally, WBC has five campuses with international campuses flourishing in Peru, Mexico, Honduras, Guatemala and soon Costa Rica.

There has always been an apostolic element to God’s call upon Dr. Johnson. Through the activities of Life Christian Church and Word Bible College over six churches have been established by those trained by him. In addition, there are numerous ministers that have submitted to Dr. Johnson as their Pastor.